Why is Memorial Day so important?

Growing up I spent my summers on the lakes of Minnesota. Memorial Day, which is observed on the last Monday of May, always signaled the start of summer and the first weekend that we opened up the cabin. It brought such excitement and anticipation of the next three months. I think for most Americans, Memorial Day kicks off the summer season as well.


It wasn’t until I became an Air Force wife, however, that Memorial Day became more significant. My husband’s career in the Air Force started in Columbus, Mississippi. Memorial Day has origins starting in Columbus, Mississippi after the Civil War. The story goes that because Columbus was positioned near a rail line, it received mainly Confederate soldiers who were casualties of war. By the end of the war, it’s believed that more than 2,000 Confederate soldiers were buried in Friendship Cemetery, along with 30 Union soldiers. In April 1866, a year after the war ended, a ladies’ group in Columbus decorated the gravestones of the Confederate soldiers buried there, as well as the graves of the 30 Union soldiers. The story of their kind gesture of humanity and reconciliation has been retold for decades in Mississippi as the origin of Memorial Day. If you go digging, you’ll find conflicting stories of origin, but there’s one common theme: honoring and remembering our soldiers who fought and gave their lives for our country.


During my husband’s career in the Air Force, we were not immune to saying goodbye to our fellow Airmen and friends who died while serving our country. It’s a surreal experience to hear of a plane crash and find out there were no survivors. It’s a humbling experience when later that day your husband comes home, and you can put your arms around him and tell him you love him.


As you’re enjoying time with family and friends during the extended weekend, keep the families of our fallen soldiers in your thoughts. If you’ve not had the opportunity to attend a Memorial Day service at a local cemetery, it’s a humbling experience. Consider teaming up with a local Veterans of Foreign Wars (VFW) community and help put flags on the graves of those who gave the ultimate sacrifice.

This Memorial Day, remember, all gave some, but some gave all. 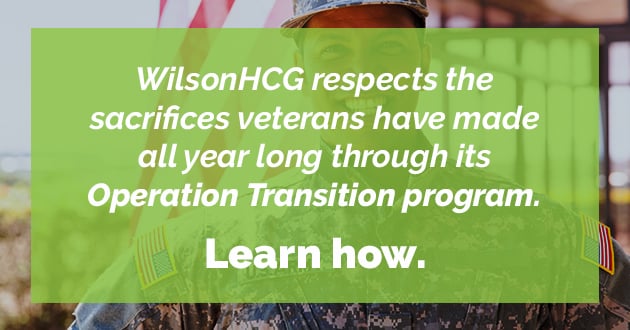 Ways to give back this Veterans Day

Effective ways to translate military experience in a civilian interview

Tara Handegard is a Recruitment Consultant at WilsonHCG.

4 HR Goals And Strategic Objectives To Make 2020 A Success

Strategic Workforce Planning: Why a holistic approach is vital

How to launch (or improve) your employer branding strategy