Trust and accessibility: An interview with John Wilson, CEO and founder of WilsonHCG

This blog was originally published on Comparably in August 2022 and can be found here.

The team at Comparably recently spoke to WilsonHCG CEO and founder, John Wilson. They asked him about what it means to be a great leader in today's market. Find out what John says and more in the following Q&A.

“When I speak to entrepreneurial classes at universities, I tell them right away that my best advice is to not start your own business. And I mean it,” said John Wilson. “Inevitably, there’s always one person who says, forget what he said – because they have an idea that they believe in. And that’s the one who usually succeeds. If you believe in it, you must put everything on the line. And understand that you might go broke, and you might be in a situation where your lifestyle will change. I know it did for me. But if you believe in something, and you feel like there’s nothing that’s going to stop you, you’re probably right.”

"This is a unique period where companies have had to make talent their number one priority."

Wilson has built and led WilsonHCG since 2002 over multiple transformations, including an impressive global expansion into more than 65 countries. Founded right after the tech crash, he led the company through the financial bubble crisis, through the tight and constrained talent pools that existed pre-COVID-19, the COVID-19 pandemic and, currently, through the great resignation.

For a leader who’s seen so many changes, Wilson doesn’t forecast return-to-office trends will be sustainable anytime soon.

“Everybody needs to stop talking about bringing people back in-office because most people are not going back,” he said. “It will not happen. Most employers saying it end up eating their words, and then they look like they’re not being straight. This is a unique period where companies have had to make talent their number one priority.”

A reflection on starting out

“I think I was probably too young to know all the pitfalls of starting a business,” Wilson said about starting out. He remembers discovering the staffing industry from “a former client, in a prior life” as he put it. This piqued his interest in researching more about how it worked.

At the time, what he discovered was endless commoditization: “Every staffing company I looked at was saying, ‘We’re better,’ ‘We’re faster,’ ‘We’re cheaper,’ ‘We have a lot of offices.’ And that was the value prop.”

What he didn’t see was any focus on building solutions around what companies were trying to accomplish. Or measuring yourself versus the company’s performance. Wilson knew the people industry needed a more humanized approach.

“Outsourcing at that point had really taken hold, with organizations looking at how they could scale and become more efficient,” he recalled. “And what hadn’t come about was outsourcing as a best practice, meaning that outsourcing was going to make you better. Outsourcing was seen much more as a cost-saving measure versus an upskill of your current process or current function back then.” Now, of course, that’s no longer the case.

Trusting employees as a culture

By the mid-2000s, a large portion of WilsonHCG’s workforce was already virtual. For its first few years operating remotely, Wilson said the leadership team would worry about how effective their employees might be working in a non-traditional environment (working with nobody standing over their shoulder, so to speak).

“It got to a point where I remember looking around our meeting room and suggesting ‘What if we just trusted them?’” he said. “It’s this crazy concept. Let’s just trust people to do what they should do. And that has really helped us, especially in the last few years, because it’s long become second nature to our culture. No one will be asking where you were or requesting you to itemize what you did that day. Those things just don’t work, and I think not trusting the employee base is a major contributor to this great resignation.”

Trusting employees is part of WilsonHCG’s DNA, which are encompassed in its core values:

"Every new hire that comes into the organization talks to every executive. And one thing I press on them is how org charts kill innovation."

“Our training program is a definite source of pride. There’s true investment into people, financial and otherwise,” Wilson said. “But I think one thing that people don’t realize about our culture is the accessibility to leadership. Every new hire that comes into the organization talks to every executive. And one thing I press on them is how org charts kill innovation. If someone has an idea, they reach out to me. If there is something that someone needs, there’s someone there to help them. I hope people feel like they can reach out to anyone.”

Much of this wisdom-in-practice boils down to authenticity, and he shares this advice with the organizations WilsonHCG advises.

“Find out who you are as an organization. You need a baseline. That’s the most important step that is often lost on companies,” Wilson said. “They want to throw money at it, or they want to put initiatives in. But the first thing you need to do is find out who you are.”

When it comes to the causes and solutions of the great resignation, Wilson is convinced that a “grass is greener” mentality may be backfiring.

“Without doubt, there are a few companies (I won’t name) that offer extraordinarily high pay. And everyone knows they’re terrible places to work, but they pay life-changing money for people, and people will go there. You can’t blame them,” he said. “And then they’re six months in and say ‘I don’t like my life. I miss the culture. I had people who I trusted. I felt valued as an employee. I wasn’t a number.’  Those are the types of things that bring people back.”

How WilsonHCG attracts and retains talent 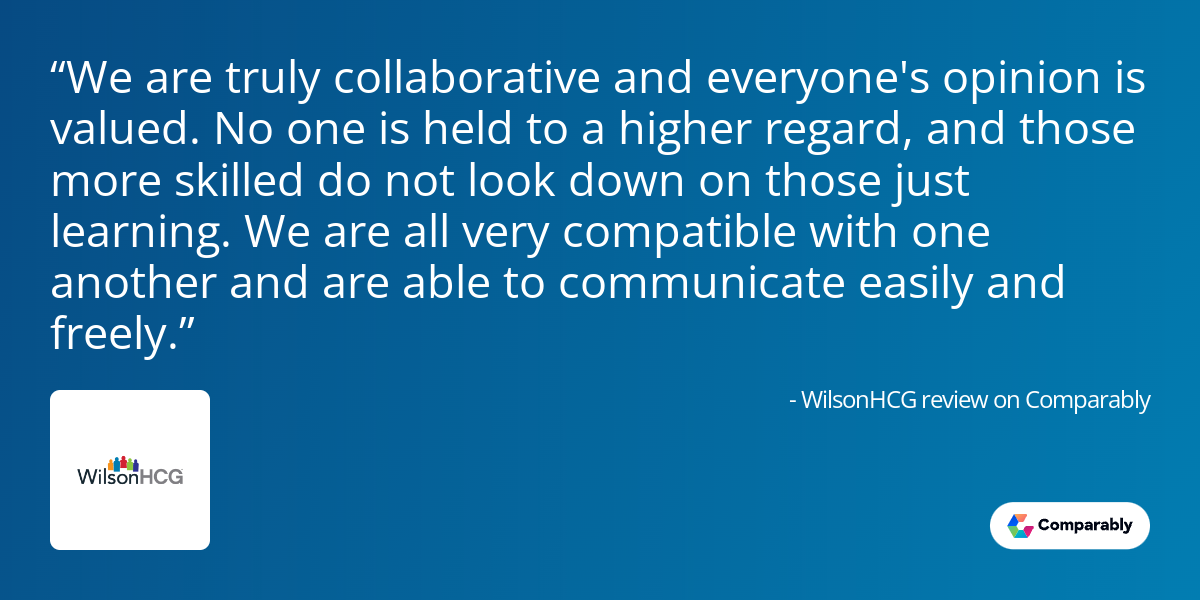 When it comes to attracting talent, Wilson argued that current employees (no matter what their role) are an organization’s best recruiters, thanks to persistent posting on social media and their interactions with the real world. In the long term, he said, this means you’ve got to address any internal issues that exist, so the good word can issue forth unreservedly from employees on platforms that candidates trusts.

“One thing I’ve learned from people all over the world is that at the end of the day, everybody wants the same thing, and that is to feel valued,” he noted. “They want to feel trusted. They want good things for themselves and their families. That transcends borders, ethnicities, everything. And when you really start to focus on that during the decisions that you make as a global company, you’re not going to go wrong.”

Wilson went on to remind global companies that work cultures vary in different regions of the world. He remembered visiting offices in Krakow that were empty five minutes before 8am but packed with 100 people by two minutes after. In other words, different than what you might find in a North American workplace.

For those interested in working for WilsonHCG, the CEO had one general request.

“Have a voice. Have ideas. Express them,” Wilson said. “Say when we can do something better with an alternate idea and say when something is wrong and how we should look at it another way instead. That solution-oriented voice is critical for people to be successful. When I think about the recruiter role that we have more than 1,000 people in at WilsonHCG, they are really consultants to our clients. When you believe in someone, you’re able to say, ‘this candidate is going to be amazing.’ Having that opinion and being able to be a consultant to the client is extremely important. And I think that transcends many roles in our organization. We want people to always keep that mindset: ‘How do we get better?’”

View our current opportunities
See what roles we have open or recommend one to your network.

Customizing the candidate experience for interns