The power of pronouns: why it’s important to encourage them

Why is it important to use pronouns in the workplace?

The use of pronouns in the workplace can help create a more inclusive culture. Encouraging employees to use their pronouns makes it clear how individuals would like to be referred to and also shows people that you respect their gender identity.

What are the most commonly used personal pronouns?

The most commonly used pronouns are “he, him, his” and “she, her, hers.” Some individuals use gender-neutral pronouns, such as “they, them, theirs.” Though these may be most common, pronouns are personal and are a reflection of the individuals’ identities. There are dozens of pronouns, but others include ze, which can also be spelled xe or zie. This replaces she/he/they. Then there’s hir, pronounced like “here,” which replaces her/hers/him/his/they/theirs.

How do you address gender pronouns in the workplace?

There are several things you can do to help address and normalize the use of pronouns. For starters, you can encourage employees to add them to the following: 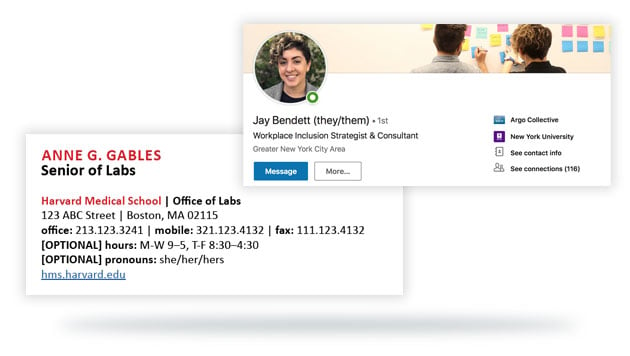 What happens if I make a pronoun mistake?

If you realize during an introduction or when the conversation has ended that you used the wrong pronouns, apologize, use the correct pronoun and move on. The importance is around consciously doing the work to correct yourself and not lingering on the mistake. If you're having trouble remembering, think of 3-5 sentences of that person in your head using their pronouns — as this helps form the habit for the future. The best apology, after all, is changed behavior.

Using pronouns as a cisgender person

Being cisgender means your gender expression and identity match what you were assigned at birth. Many refer to assigned male at birth (AMAB) or assigned female at birth (AFAB) instead of "born female." So if you're AFAB and identify as a woman, you're a cisgender woman.

Publicly declaring pronouns is one way to be an LGBTQIA+ ally. Many non-binary and transgender people add their pronouns to their social media platforms and bios to avoid being misgendered, but this can sometimes lead to targeted abuse. If cisgender people use their pronouns, it will become common practice and will help to normalize the process of asking people what their pronouns are instead of just guessing.

These steps to implementing pronouns in your organization can go a long way in making your workplace more inclusive.

Marisol Hughes, executive vice president of people operations and general counsel, oversees WilsonHCG’s people and culture function and serves as the company’s chief legal advisor. She is an astute legal professional with a strong background in people and culture strategy. Her broad expertise includes corporate law, employment discrimination, and governance and civil litigation. She is an active member of the Florida Bar Association, and has been honored with the Labor and Employment Law Section Dean Gary W. Vause Award as well as being named a Tampa Bay Business Journal Top Corporate Counsel finalist. She holds a Juris Doctor degree and an MBA.

Diversity and inclusion: Personality styles in the workplace

The top 7 benefits you maintain after using an RPO

What are the top talent acquisition trends for 2022?

Why are boomerang employees valuable to business?